The Exceptional Public Access Plan for the Ballona Wetlands

Did you know California’s Ballona Wetlands Restoration Project will create the second-largest natural habitat recreational area in the City of Los Angeles, second only to Griffith Park? Indeed, it will become the “Great Park” of the coastal Los Angeles area, but few people are talking about this 600-acre recreational jewel.

People most intimately familiar with the Ballona Wetlands Ecological Reserve tend to focus on the wildlife benefits of the state’s coming restoration project. As a member of Los Angeles’ community of environmental professionals, I’ve often questioned supporters and peers about why they shy away from touting the public access and recreational benefits of this fantastic “undevelopment” project. My sense from them is that many restoration advocates, particularly naturalists, view public access as a risky proposition for wildlife, if not well-regulated. In my opinion, these fears are unfounded and in fact, public access at recently completed large wetland restorations proves otherwise (1,2,3,5).

When completed, the proposed Ballona Wetlands Restoration Project (Link 4) will create nearly 6 miles of new pedestrian-only trails, including approximately 2,000 feet of elevated boardwalks to allow visitors to walk next to the wetlands and get close-up wildlife views. Trails would have native plants on either side where possible, and include signs and resting points with seating. The boardwalks will be specially designed to accommodate disabled persons. Just not that into wildlife? Then just come and have a picnic, read a book, or paint a canvas. 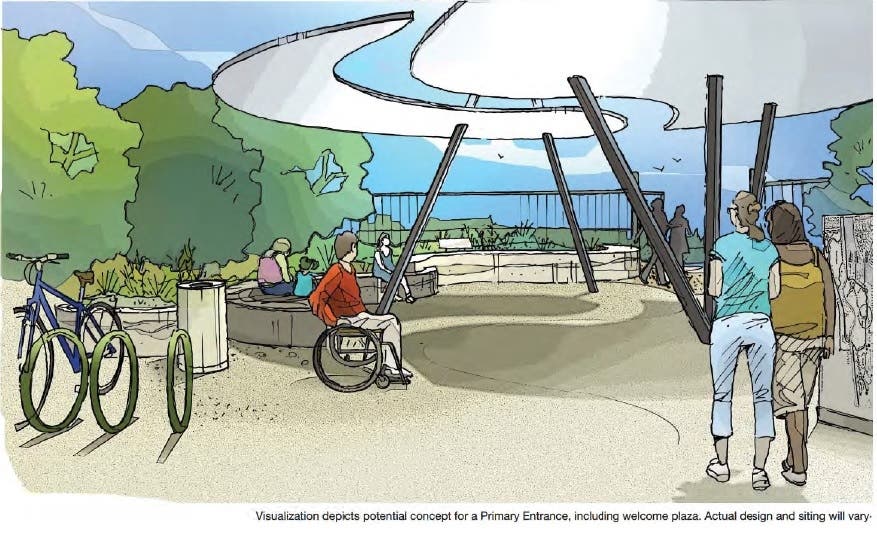 In addition to the foot paths, about 3.6 miles of new combined pedestrian and bicycle paths would be built at Ballona. These paths separate the cyclists from walkers – a much safer design than our existing area bike paths 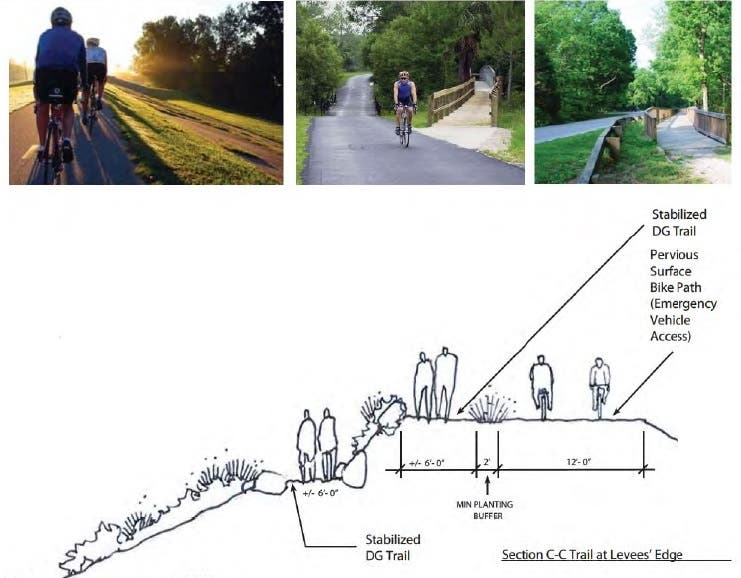 Two east-west bike paths, instead of the current single one on the north Ballona Creek levee, would connect with the Coastal bike path at the Beach – one north and one south of Ballona Creek. Also, we’ll get a brand new bike and pedestrian bridge over Ballona Creek next to Lincoln Boulevard, separated from car traffic, so folks who live south of the creek will no longer have to navigate the hair-raising Lincoln Blvd. car bridge to access the bike paths. See the entire trails plan view below. Right click on the image to open in a new tab and see the details. 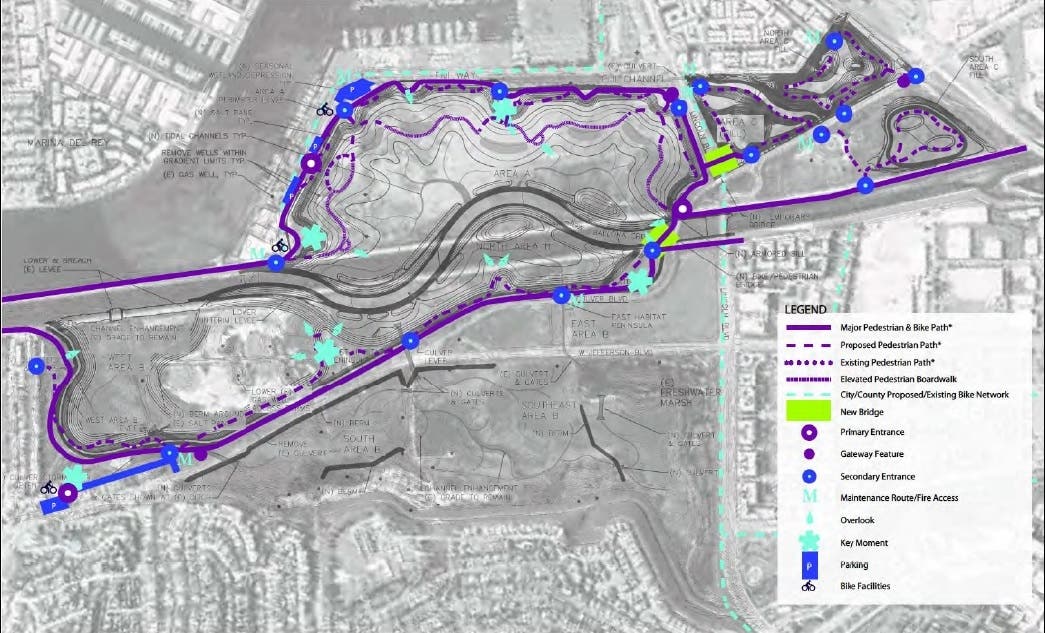 Fenced overlooks along paths and trails will provide views and information about the Ballona Reserve (see figure below). Overlooks would include informational and directional signage in some locations. Benches to accommodate small groups also would be included in some locations (for your picnic). 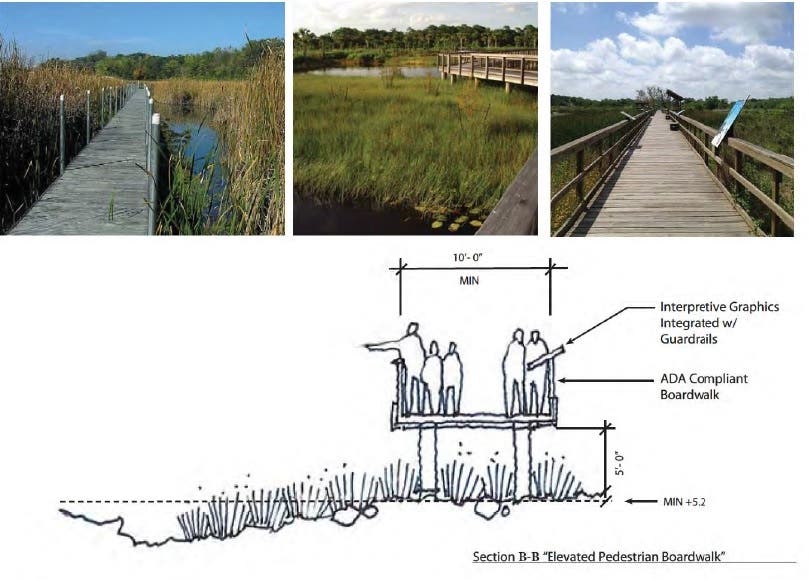 Five areas in the Reserve would give visitors close-up opportunities to learn more about wetlands habitat, animals, and the larger watershed system. Educational art pieces may be included as well. Sitting and picnic areas, trash receptacles and bathroom facilities will be provided at the main entrance point. Parking will be located in a few areas, but mainly where county vehicles currently park on Fiji Way. Access would only be allowed from dawn to dusk.

Since state law allows only well-regulated access to Ecological Reserves, most of the Ballona Reserve is presently not accessible except via guided tours conducted by a few non-profit organizations. This will all change with the state’s project, which allows the public to freely travel a broad network of established trails and paths, but prohibits any off-trail access. Rangers on patrol will ensure folks stay on trails, keep dogs on leash and follow other rules and regulations customarily established for natural areas.

Scores of coastal wetlands have already been restored in California, pursuant to the Coastal Act and funded by bond measures repeatedly approved by voters. At most of these sites, well-regulated trails and paths replaced old “social trails” which the public had worn into the landscape in a helter-skelter fashion.

Above Photo: Unregulated “helter-skelter” social trails in the Ballona Reserve, Near Via Marina.

Many studies showed these social trails potentially impacted wildlife, but the impacts were eliminated once fenced, signed and properly maintained trails were provided as replacements. Even absent ranger patrols, people tended to police each other in wildlife areas, studies show. During sensitive breeding periods, some trails are temporarily detoured to protect wildlife at critical times. This will be the case at Ballona as well.

Above Photo: Elevated boardwalk at the completed San Dieguito Wetlands Restoration, near Del Mar. At San Dieguito, less than 1% of 80,000 trail users each year went off-trail during the 5-year period 2013-17 (Reference 5)

If you look forward to the recreational benefits of the Ballona Project, it’s important to let your elected representatives know. Don’t let a vocal minority speak for you! Send an e-mail to L.A. County Supervisor Sheila Kuehl via this Link and tell Sheila you “support approval of the state’s plan to restore Ballona to a full tidal wetland, including proposed public access.” Supervisor Kuehl will represent our interests on the state’s proposed restoration plan.

Let’s all look forward to packing the kids or dogs in the car on a Sunday morning and having a nice picnic walk at the “Great Park.”

1. Bradford, L.E.A and N. McIntyre. 2007. Off The Beaten Track: Messages As A Means Of Reducing Social Trail Use At St. Lawrence Islands National Park. Journal of Park and Recreation Administration, Spring 2007 V. 25, No. 1, 1-21 https://www.researchgate.net/p…

3. C. Pickering, S. D. Rossi, A. Hernando and A. Barros. 2018. Current knowledge and future research directions for the monitoring and management of visitors in recreational and protected areas. Journal of Outdoor Recreation and Tourism, 21, (10), (2018).